I thought I would start with a little history on how my model railroad incorporated CTC operation and the evolution that brought Mike and I together.

CTC on operation on my Utah Colorado Western started back in the 1970’s with a home built board and whatever hardware I could scrape together. Although crude it was functional allowing for switch control, some basic detection and the signal aspects just followed the movement of the switch machine, but more importantly I was hooked on CTC operation.

I was introduced to Rod Loder, from Salem, Oregon, in the late 1980’s by some mutual friends, and we immediately struck up a friendship that is still going strong today. Rod has had a tremendous influence on the UCW, especially the CTC operations and it was during one of his frequent visits that he stated it was time to put a real CTC machine into operation. The year was 1989 and the Southern Pacific was closing it’s Eugene, Oregon dispatchers office, moving everything to Roseville, Calif. and he had made arrangements to purchase the CTC machine. Was I interested? Absolutely! When do we start?!!!

Well if we had known what we were getting into I doubt that this thing would have ever gotten of the ground. But we were much younger then and the challenge was half the fun. The war stories of that first machine are several hours long and the outcome was successful but not without out numerous revisions to the UCW track plan, signals to install, detection resistors needed for each car, block detectors, rewiring the entire layout and installing miles of wire (this was before any thought of running it with a computer) to make the whole thing run and that was just on my end. Rod was re-building the board in Oregon and dealing with hours of work as well, not to mention the 8 plus trips to Utah in late 1989 and 1990. Why all the fuss and hurry to get this done? Well the Pro Rail group had selected Utah as the host team for April 1990 and we wanted to have this thing up and running. Nothing like a deadline and a visit by your peers to supply the needed motivation to get something done and we almost made it too! The only thing working were the detector lamps and the switch machines which didn’t stop Steve King from having a blast dispatching the railroad. Several more trips by Rod and Gary Waite (Gary is also from Salem and was Rod’s traveling partner on all these trips and also good friend) and we finally had the thing up and running.

This first machine was very much an experiment for all of us and we were pretty much flying by the seat of our pants. For instance, we weren’t sure if we could get a full height and width machine down my basement stairs, so we cut off the bottom of the machine and made a desk top model with a 30 inch front panel and two 14 inch wings. Original hardware, levers, plates, lamps etc., were used and everything was hardwired using home built logic circuits for the signals and Bruce Chubb’s detector circuits.

Well it seems we were hooked, especially Rod, who took the bull by the horns and formed Levers West, a small business dedicated to finding, refurbishing and building new machines for a small group of diehards who just love this stuff. About 10 years ago we were able to get our hands on a number of old Union Pacific machines from the Pocatello, Idaho dispatch center that had been removed from service a number of years ago. This supplied Rod with numerous parts and pieces for his future customers and was the basis for my new machine which we installed in Sept. of 2000:

I got a call from Rod in early 1999 with a question, “Do you want to sell the SP machine”? Seems somebody crazier than us had to have that specific piece of history. Well the price was right and a new machine started to take shape in Salem. The installation would coincide with our decision to change from a home built computer system, designed, built and installed in the mid 1990’s by Jon Robinson, good friend and UCW crew member. Jon’s system worked very well but was ready for some needed updates and after weighing out the options we decided to install Bruce Chubb’s CMRI hardware. A wise decision, the stuff works great, is a breeze to install and is easy to program (well as least for some people). Several requirements were a must for the new machine, it had to be full height, have an attached desk top and would be approximately the same size as the first one. The hardware is all original lamps, levers etc., but the plates were all new this time and new track diagrams were also made.

Rod called one day and said you’ll never believe this. I just got a call from signal maintainer back east who asked if I could build a small control panel for the CN. They had called Union Switch and Signal to see if they could build the panel and said “We don’t build that old technology any more but we know of a small business in Oregon who builds stuff for the hobby” contact him. Well that person turned out to be our good friend and the man behind CTC Components, Mike Burgett and the rest is history.

From that meeting Rod and Mike struck up a friendship that has benefited all of us who are interested (obsessed is probably a better term) by this old hardware. Several years ago I hosted a CTC symposium, here in Utah, and invited Mike, Bruce Chubb and several others to attend and present a few clinics. We had over 30 participants and it was our first chance to meet this “Signal Maintainer from Hell” and listen to his fantastic presentation on CTC operation and the various line side details needed to make it all happen. If you haven’t seen or heard Mike’s presentation I encourage you to do so. 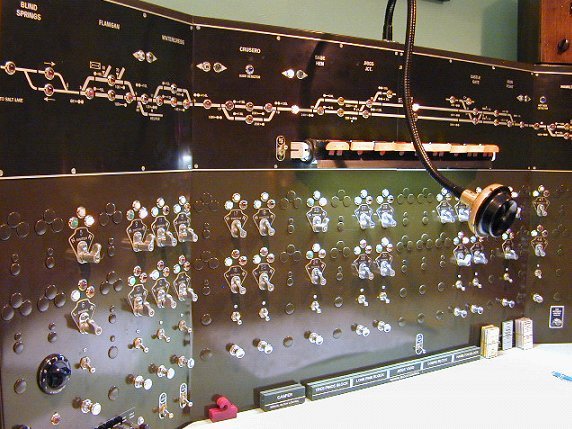